Sarah came to the Co-op in March 2018. She decided to join the board because of her passion for local foods and wanting to be involved in her new community. Having worked on organic vegetable farms for a few years, she realized how important the local food web is. Moving on to a full-time career meant that she had to give up farm days, and she wanted to make sure she was still doing her part. That is when she decided to join the board. She manages the front end of an Environmental Laboratory in Lebanon, NH named Endyne. She graduated with a B.S. in Environmental Studies. In their free time, Husband Ben and Sarah love to kayak, swim and hike, and they also love good VT beer.

Brooke has been on the board since 2011. She has served 5 years as president. Her background includes Organic Vegetable Gardening, Beekeeping, and Food Systems Education. She is so excited to be part of this exciting project with the Springfield Food Co-op. She sees this project as great potential to strengthen our local community, food system and economy in a unique and dynamic way.

Jane spent 25 years in Metro, NY working in consumer products marketing before becoming a self-declared corporate refugee in 2002 and moving to Vermont with her husband to reopen the shuttered Inn at Weathersfield.  After establishing a reputation as one of the top Farm to Table destinations in Vermont and 10 years of hospitality, they sold the inn. Jane now runs her own marketing consulting business working primarily with small farms and cheesemakers. Jane joined the Co-op in 2013 and has served as Vice President. “I’m thrilled to be part of the Co-op expansion team.  It’s wonderful to work on a community project with my neighbors, bringing even more local food to more people. I’m hopeful that we, as a Co-op, can be a part of the economic engine to redevelop this beautiful and historic town.”

In 1975, Steve opened a restaurant in Springfield, and has worked in and around Springfield ever since. He and his wife have been members of the Co-op through several iterations – first buying groups, then as a neighbor with the tire store and now to the location tucked behind the local liquor store. He has worked in the Springfield area for the last 44 years and has been on the board for 8 years. It is with great pleasure that he is involved with the Co-op currently as it makes a move to downtown Springfield, where we hope to bring new vitality to a town that has seen better times.  He believes the Co-op will bring new life to the area, which should attract young families, raise home prices, provide a town of some 11,000 people with a coffee shop, deli, health food store, and alternative shopping experiences.

After more than 20 years as a member, John joined the Board of Directors of the Springfield Food Co-op in 2018. Since arriving in Vermont more than thirty years ago, he has been part of a co-op community: first working at the Middlebury Natural Food Co-op and, after moving to Windsor County, volunteering at the Upper Valley Food Co-op and then the Springfield Food Co-op. John has taught at C.A.M.P. – the Claremont Alternative Middle School Program, and as a correctional educator for the Community High School of Vermont at the Southern State Correctional Facility in Springfield. John is excited at downtown Springfield’s revival and the role that the Co-op can play offering a range of wholesome, local and regional products for the community and making downtown a vibrant place to shop, visit, live, and thrive.

Email a Board Member

Please wear a mask if you are unvaccinated, or feel more comfortable doing so. 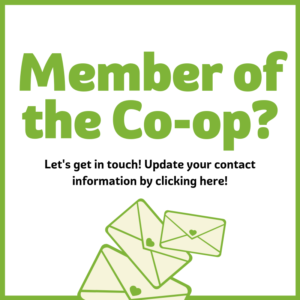 Until further notice board meetings will be held virtually.

Next board meeting TBD.